General Observations: With New Jersey looking more like the Arctic Circle than the garden state the crew began the month by repairing the collapsed farmhouse gothic through somewhat unconventional methods. After greenhouse repairs were complete the crew shifted its attention to the overcrowded chicken coup. Following these pressing matters, perennials were pruned and greenhouse planting successions were completed despite freezing nights and strong winter winds. With low temperatures well below freezing through the last week of March, thawing greenhouse irrigation was the main priority. Preparing the beds for planting with compost and minerals and moving the chicken coop brought an end to March and the last of the winter weather.

Equipment (16 hrs): (3/17) Leaking coolant required repair of the JD 2240 after being used to repair the snow damaged farmhouse gothic. (3/26) IH 140 used to spread compost of 16 beds on the vegetable C south field at 1.5 yds³/bed. (3/27) Both batteries on JD required replacement after clicking noise and lack of engine turn over observed.

Administration (146.5 hrs): (3/5) Roundtable meeting for crew to discuss personal interests, focuses and plans for upcoming season. (3/6) Completed farm summary of 2013 harvest data with brief comparison to previous year’s summary. (3/13) Seedling sales for market and Whole Earth Center were logged and the March 2013 summary was posted. (3/17) Farm manager joined Matt Conver from Cherry Grove Organic Farm at market meeting in Summit, NJ to discuss the market details, guidelines and liability insurance rates. A pallet of chicken feed was ordered from Lakeview Organics. (3/18) Third year focus, introduction and plan established (3/19) The final seed order from JSS was placed and brief review of seed orders was done. (3/20) Soil fertility introduction for this year’s crew was done with the aid of the previous year’s soil tests. The science of trimming fruit trees was practiced with varying degrees of success. (3/27) April summary completed.

Infrastructure (124 hrs): (3/4) New toilet and shower fittings put in farmhouse for a total cost of $1250. (3/7) Chicken coop moved from chicken yard to Farmhouse Gothic for the time being. (3/12) With the first planting comes lessons of greenhouse operations involving irrigation, heating, ventilation and soil preparation/seeding. (3/13) Thawing of the greenhouse irrigation lines is the major task of the day as the culvert and drain valve are frozen. (3/21) The crew preps the new high tunnel area for construction. A drainage issue in Big Garden Bed south is noticed and furrows are cut to allow drainage. (3/26) Cold and windy temperatures brought inconveniences like freezing of the drain in the greenhouse which required 1.5 hours to drain. (3/26) Electric fences are put up around the chicken flock in the pasture to deter the family of foxes. 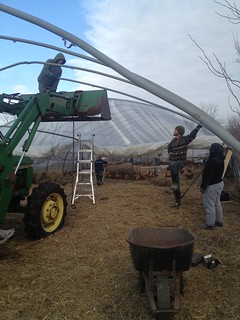 Greenhouse (165.5 hrs): (3/4) Trimming of the greenhouse shade willows begins. (3/5) A major renovation of the Farmhouse Gothic is required after collapse due to heavy snow. JD and the crew were required to lift the hoops and reform the greenhouse structure. (3/7) Ralph’s house beds were formed and staked out. Tomato strings and drip tape were all removed. (3/12) Greenhouse orders were created and the first day of seeding commenced. Onions, leeks and the first succession of vegetables were started. (3/13) Beets, cabbages and zinnias were all started. The farmhouse Gothic walls were all secured to protect the chickens from the heavy winds. (3/14) The entire first seedling succession has been started. (3/15) Heated mats and chimney repairs have allowed the greenhouse to reach proper germination temperature despite freezing temperatures outside. A single heavy watering at 1pm each day supplies ample water while allowing convenient drainage of the pipes so as to prevent freezing overnight. (3/23) Rodents mercilessly killed all the greenhouse sunflowers. Bells of Ireland and dill were planted to replace the sunflowers. (3/30) Post holes were dug and filled on the west end of the Farmhouse Gothic and lumber was inserted into the poured concrete. The remainder of the greenhouse was cleared to make way for the spring rush.

Planting (19.5hrs):  (3/12) First day of seeding with onions, leeks and first vegetable succession begins. (3/13) Planting continues with the beets, cabbages and zinnias all being planted. (3/14) First seeding succession is started for the time being. Extreme cold weather and hard north winds require heat mats and space heaters to ensure germination is successful. (3/20) After soil tests were complete a recommendation of 80#N/ acre or 2#N/1000ft² was decided upon. A change in fertilizer application was decided upon for the season. North Country Organic Natural 6-0-6 No-Phos application was applied ($26.35/50#). (3/25) Seeding for seedling sales and greenhouses, which includes tomatoes, basil and the next round of flowers, has begun.

Crop Care (122 hrs):  (3/4) Shade willows around the greenhouse begin to be trimmed. This task continues throughout the second week of March. (3/14) The introduction to pruning, tree anatomy, tools and shape of tree takes place. (3/18) The field walk with the first years is used to discuss mulching, remay details (ie: light and heat retention) and electric fencing operation. (3/20) With tree pruning nearly complete the focus shifts to the other perennials (blackberries, asparagus).

Marketing (5 hrs): Attendance of the Summit Farmer’s market meeting to discuss details and NSF location at the market.  .

Week 2: With the ground still snow covered the week ends with an extreme wind storm and below freezing temperatures.

Week 4: Freezing temperatures with heavy north winds threaten to remove the walls of the greenhouse and temperatures are consistently freezing during the day.