Summary
At the beginning of this season I began by inventorying the seed and culling a lot of old and miscellaneous seeds. This task was to help formulate the seed order, but also gave the whole process a fresh start. We then looked at maps of last season’s crop rotation and quickly established the fields we would be using this year. Collards and kohlrabi found a more permanent spot in our field crop, but for the most part, the previous year’s crop plan was applied to this season. After establishing how many beds we would need, calculating the amount of seed needed is pretty straight for ward when you have previous year’s data. Ultimately, more seeds will need to be ordered at some point, and the plan will take on some minor changes.
Planting our first vegetable succession in the Big Garden Beds is an example of adapting the plan to use the ground available to us. The field beds we had prepared the year before for this spring were far too wet. So instead we planted them intensively in our permanent raised beds. The crops did great and even though the leeks stayed nearly all season, they did not disrupt our usually carrot and salad greens rotation in these beds.
The most notable aspect of planting this season was continuing and expanding our experimentation with our field crop production. For the past two seasons we have been planting our tomatoes into what we’ve dubbed this year “Favorable Furrows”. Kyle describes the method clearly in his planting summary; in addition to a challenge we faced using it that season. This year we also used this method to plant one of our vegetable successions. The results were great. The plants were quite vigorous and beautiful, and the weed/grass pressure was very manageable. This is achieved by rototilling the pathways with the BCS.
Each row got a pass down and back with the BCS hugging up as close to the crops as possible. Some of the pathways between the crops were treated three times and some only once. The pathways treated thrice had best results, but the crops were big enough that I was concerned about damaging them. The rototilling was done in second gear. The quicker pace prevented the BCS from tilling to deep. It did a great job of chopping up the vegetation just on the surface and leaving the soil and thus seed bank relatively undisturbed. The only spots that new weeds really shot up was right next to the crops in the furrow itself, but these pulled easily when a little bigger. Hand weeding was done only once and fairly quickly. In the future one might fit a scuffle hoeing not long after transplanting. Interested in hand tools, I tried a grass whip to knock back some later growth in the pathways. It worked ok as far as effort and efficiency, but ultimately wasn’t quite right enough. I suspect there is a better tool out there for this kind of work.
Particularly exciting aspects of this method was the reduction in time and equipment. Harvesting the cover crop for stray was done as usual. Then the riding mower was used to clearly cut out the field as low as we could. The furrow was ripped with a center shank on our IH 140. The goal is a trench as deep as the shank and roughly two shanks wide. This was done with a couple passes up and back. I found it helpful to try and get the shank just deep enough to peel the grass out of the way on the first pass. Subsequent passes shaped out the furrow and with moderate speed most soil was kept in or close to the furrow instead of it being thrown out far to the sides. Beginning a small scale farm, the low horse power cultivating tractor and BCS combo used to selectively prepare planting space might be a more accessible start to field crops then the equipment needed to prepare the entire field. With our standard field bed preparation, we use four tractors, some of which need to be much stronger and heavier. Recently, Mike presented me an article he found about deep zone tillage. After just briefly looking into I found examples of people using similar methods. So, we are looking forward to experimenting and improving in the seasons to come. 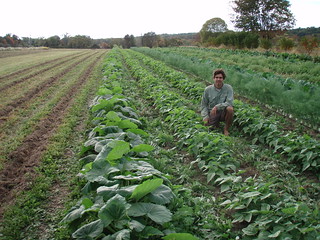 We were also constructing a new high tunnel through out the season with intention of growing more tomatoes. It was quite the building project and learning process for the whole crew. We managed to get the tomatoes in by the 15th of July, and raced to finish our end-walls before the frost eventually came. The trellising presented some problems and irrigating needed some fine tuning, but the plants did very well in the new production area putting out big beautiful fruits.  Additionally our cover cropping went well and as predicted this year. Most of the fields being seeded were close and somewhat in line with each other, making the process pretty easy.

Conclusion
Focusing on planting has broadened the scope of my actions during the season. I was able to see clearly how each action or step informs the next: The crop plan and seed inventory leading to a seed order, having transplants depending upon the green house order forms being made and filled, the planting depending on the bed preparations, and ultimately it all coming together to form the products we take to market and support the farm. The process has been an exciting and intriguing part of the season, and has rounded out my understanding of the elements to farming.
This concludes my third year, and thus fulfills my internship at North Slope Farm. Having had no prior experience, I’ve learned everything needed to further pursue farming as a means to a very fruitful livelihood. The seeds have been planted and the vision I hold of my future has been greatly expanded through the time spent on this land and being apart of this farm. It has highlighted the dynamic rhythms of nature and solidified my desire to actively engage its intricate unending flow. The lessons to be gleaned are life long. Finally, the amount of amazing people I have met and the lasting friendships formed at North Slope farm, other farms, and in the this area through all sorts of different gatherings have been truly inspiring. I am grateful for the opportunity to be apart of a community and the future they are working so hard to grow.