Monthly Summary- September 2014
Logs reviewed and summary prepared by DD on 12/1/2014
General Observations: During September the usual rush to harvest summer and fall crops for each market keeps the crew busy. However, despite the weekly market rush, a tangible drop in tension arises with the first days of the month. The cover crop plans are drawn in detail and field preparation puts planning into action. Seeing the land transform from stress invoking production blocks to a carpet of grain, destined for a year of rest, puts one’s mind at ease.
Equipment (53.5 hrs): Field preparation for planting cover crop comprises the majority of these hours. After production, debris is cleared from the field and the field is disked, seeded and raked via tractor implements. This procedure was done in two fields (veg a north and veg b north and mid). Two hay fields (Veg C & 579 north) were planted with cover crop for future plans. These fields required mowing, several passes with the disc implement, seeding, raking and rolling.
Administration (38.5 hrs): These element hours are primarily a result of the payroll completion. Monthly summaries for the 2013 calendar year were completed and trips to acquire fresh fruit for market rounded out the remaining hours.
Infrastructure (85.5 hrs): Standard upkeep of farm properties requires a significant number of hours to maintain a useable space, especially at the end of summer when wild plants are reaching full maturity. Training on primary tillage becomes a major priority when the late season rains begin to pop up in the forecast. In this process, tractor usage is described in detail. Implement attachment points and the hydraulic mechanisms used to operate them are described. Tillage implements are described and put into use to demonstrate for trainees.
Greenhouse (24.5hrs): Constructing the end walls of the previously constructed high tunnel frame leads to several lessons in construction for the trainees and a handful of work blocks for those involved.
Composting (16 hrs): Composting via compost spreader and spreading by hand (atv trailer and shovel) are the normal preparation procedures for the field furrows and big garden beds respectively. For tight areas inside of hothouses, wheel barrows are filled and distributed evenly over the pre-formed beds.
Planting (45.5 hrs): This element was reduced by 120 hours from September of 2013. The majority of these hours result from planting in the big garden beds. Only one field succession was planted during this month. Typically, late in the summer, big garden beds are direct seeded while the field furrows are prepped and filled with transplants. In September 2014 only one succession of fall crops was transplanted into furrows. Also, direct seeding is inherently less time consuming than plugging in transplants. 2 big garden beds were prepped and direct seeded on 9/10 with mesclun mix. Also on 9/23, 3 beds of mesclun mix, 2 beds of tatsoi, 1 bed of arugula and 3 beds of roots (turnips & radishes) were direct seeded. An interesting note about planting times; the crew noted the final seeding of carrots being 9/4 in 2013.
Crop Care (153.5 hrs): Being only second in element hours to harvesting, crop care requires a large deal of crew hours. Thankfully, when many hands are on a job the work becomes light. Never the less, keeping crops free of competing weeds becomes a major drain of the crew’s time and effort, especially when hand weeding is involved. The completion of production in field blocks requires a good deal of cleanup especially for crops like tomatoes, which require trellising. Additionally the use of season extending fabrics requires hoops and sandbags for securing the material. With the season heading deeper into fall, covering fall crops becomes the main priority to maintain a diverse display at each market.
Harvesting (475 hrs): Harvesting is always the major priority for the crew when weekly markets are in full swing. The month of September in particular is the time when the greatest diversity of food is available on any small diversified farm. Fruit, summer vegetables and fall vegetables are either maturing to full flavor or are only weeks away from maturity. This results in daily harvesting especially for rapidly maturing summer crops like snap beans, summer squash and tomatoes. 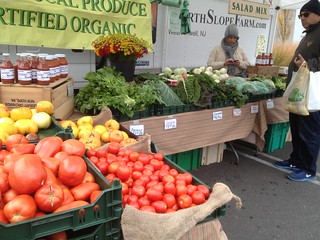 Handling (86 hrs): Washing Thursday harvests (greens and roots) and mesclun mix on Fridays results in the bulk of these element hours. Efficiency is a must for any grower when harvesting in the heat of summer. To ensure a reputable product is brought to each market, greens must be picked and bunched as expediently as possible to ensure rapid transition to cooling. If this is not done with haste the crops will look unappetizing to say the least.

Marketing (112 hrs):As mentioned previously, the full gamut of farm products are available during the month of September. For the market gardener and any small farm for that matter, being able to effectively market one’s farm products is crucial to generating income. In this way the grower can capitalize on the work involved in growing and maintaining the plants. This is especially true with perennial crops which can vary greatly in yield from year to year. Flowers have also proven to be a very profitable venture. This crop in particular serves many functions. Flowers generate significant income if marketed effectively. They also provide a significant amount of pollen for wild pollinators. This inevitably draws beneficial insects to production blocks. These pollinators influence flower fertilization and can reduce populations of crop damaging insects via parasitism and predation. 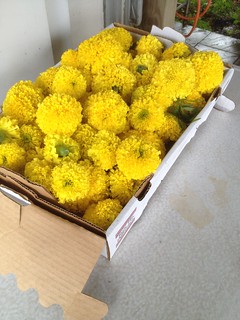