In our second year at NSF, as part of the training program, interns are encouraged to choose a work element as a focus for the season. I chose planting because I wanted to get a thorough understanding of what is ultimately the main goal of farming; growing food. One of the motivations driving me to farm is the desire to see all aspects of the production process, to see my role in it, and to be able to take satisfaction from producing a product from start to finish. Within the farm’s system the planting element especially encompasses that scope, from planning, through production, to the final product at the end of it. The first task for the season was to create a crop plan. The crop plan lays out a rough schedule for the course of the season and helps to keep the farm on track as the pressure mounts. My plan was based off previous crop plans, especially Steve’s (ST) from 2011 for which much documentation was available, modified by having additional land in cultivation and the analysis of the 2011 season. Following NSF’s system of succession planting and incorporating our crop rotation I created a plan that had 6 main field successions plus a field tomato planting. In addition I planned to have regular salad seedings in the BGBs every two weeks, as well as carrots, radishes, turnips, and other greens as the season suited.

Once I had this rough plan I could start doing some calculations for the seed order. Thanks to Rita (RR) for doing an inventory of the seed the farm had in stock, making sure we didn’t order more of something we already had too much of. Figuring out the right quantities to order could be tricky at times as there isn’t really a standardized unit of measurement for seed, even within a single seed catalog you can find some seed measured by weight and others by count and we use 3-4 sources for our seed. A rule of thumb we often used was after all the calculations, double the amount to be safe. Our initial order was around 2,000 dollars, which got us through most of the season. The season’s total was around 3,000 dollars for seed.

One of the perks of taking on the planting element is selecting varieties. NSF has a cohort of tried and true crops and varieties that need to find there way into the crop plan, but there is some room for experimentation. I was happy with both the leeks and the Napa cabbage which were added to the plan this past season. The leek seems to be a good candidate to replace the scallion as an allium we can offer; for us scallions are a drain in labor hours for harvesting and handling that the market price doesn’t reflect. Leeks on the other hand require less time to prepare for market. I’m excited to try leeks again using a technique I saw Elliot Coleman present at the NOFA-NJ winter conference that doesn’t require hilling, simply by transplanting the seedlings in deep holes the same effect is achieved. The Napa cabbage was another hit, we got a decent yield even during heat waves, but they really shined later in fall when we got some real giants and more cabbage then we knew what to do with.

Once the plan is made and the seeds have arrived the growing can begin. Our first official day of the season was March 6th, and by the 8th peas were being seeded. More peas were seeded in the field on 3/21 as was our first BGB succession and the first succession of field vegetables were transplanted out on 4/6, which was all right on time according to the plan! For the most part I feel like things went fairly smoothly, although the plan changed as the season progressed. In my memory the weather on a whole was not as wet as 2011 and we faced fewer delays due to wet fields. 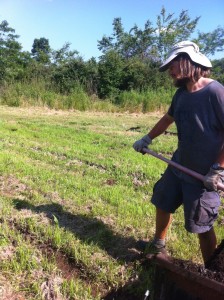 The exception to this might have been our field tomato planting. We tried a new method on NSF for tomatos this past season, inspired by the practice of no-till farming we sought to use a minimal tillage technique. In place of the standard practice of preparing field beds we cut furrows through the cover cropped field, filled the furrows with compost, and transplanted directly into that. In this manner we only tilled the soil where the transplants would go, leaving as much of the field’s soil biology as undisturbed as we could. Unfortunately we used a shank that was more aggressive than we need and ended up with trenches deeper than we needed. Then in the first weeks following the transplanting we got a bit more rain than we would have liked and the furrows in our heavy clay soil held water like troughs. The result was transplant shock and nearly all of our tomatoes turned a very unhealthy looking yellow. The prospect of our field tomato succession failing was frightening as tomatoes are a huge part of our market revenue, so it wasn’t long before panic set in. I sought to plant more tomatoes, but by June it’s a bit late to start new tomato seedlings. Luckily RR had a small but diverse selection left over from her seedling sales at market. We planted tomatoes everywhere we could, both Ralphs House and Farm House Gothic, some pilfered beds from the 579 flower field, and even a small space on the fringe of the farm which hadn’t been used in some time. In the end the original tomatoes bounced back after a few weeks of dryer weather and some compost tea delivered via our new mobile water tank w/ PTO pump. The delay in growth cost us, we were a few weeks late in hitting our tomato stride, but after experiencing all those yellowing adolescent plants it was a relief just to have tomatoes producing at all. 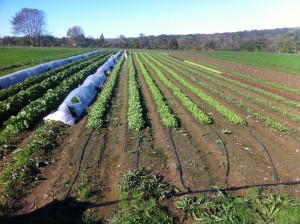 The vegetable succession went more smoothly. Successions 1-3 did well and were on time. We did abandon some scallions to the weeds in the 2nd. In our 2nd and 3rd succession the kale and chard held on well past what was planned, letting us supplement the later successions. We had the idea to mow off some of the old chard above the root, MR let me try it, and the results weren’t too bad. For the 5 minutes it took to mow we got some re-growth we were able to harvest for a few more weeks. The cabbage in the 3rd succession provided some yield, even as it battled the heat of the summer. The 4th succession went a bit less smoothly, much of the direct seeded crop failed to get good germination and we were short on the transplants. This led to some lighter than ideal harvests some weeks, but with the supplemental crops from 2nd and 3rd succession we did our best to get our harvests.  A bitter-sweet windfall we got to harvest some purslane from the 4th succession field where beets had failed to germinate. We lingered in the 4th succession field, extending its use by reseeding in the beds were crops had failed. As a result we ended up planting only 5 successions total. In the 5th succession we had a lot of space for direct seeding, after my experience direct seeding the 4th succession with poor results I was anxious to try again. One weekend in mid-September I went out with a bucket of seed and the old 4-point seeder which has fallen out of favor at NSF, in what I presumed to be futile gesture, did seed 10 beds in various greens, radishes, and turnips. I remember it took me quite a while to set up the irrigation afterwards. Within a couple of weeks the field was filled with green in nice straight rows, everything was germinating! Totally bucking my expectation, the direct seeding worked better than I could have asked for. I was very proud of that final succession. 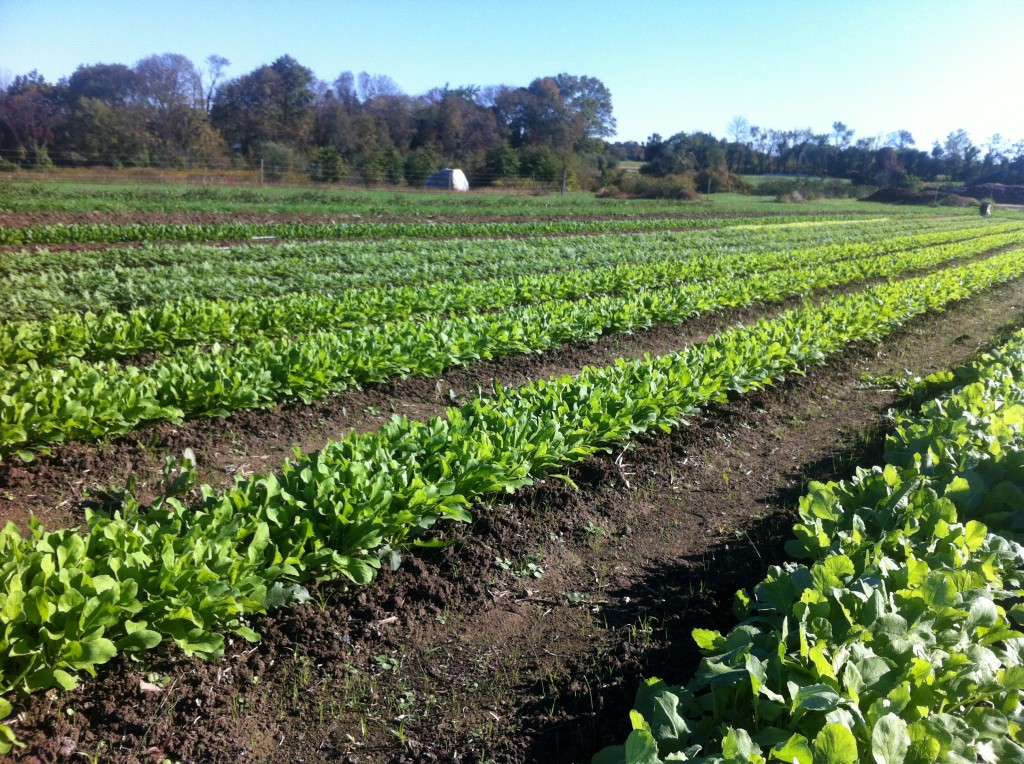 For the Big Garden Beds I wanted to really solidify salad production and they key to doing that at NSF is planting 2 beds of salad every two weeks. We ended up doing 13 successions of plantings this past season. Space in the BGBs got cramped at some points so it will be nice bringing the new BGBs into production this coming season. I felt like we did a good job of keeping on track with our salad successions as far as planting every two weeks throughout the season. We had salad at points when no one else at WWCFM did and only really missed one seeding date in late July/Early August. Really nailing down germination would be a big thing for BGB production. We also had a good amount of carrots especially late season, we kept up planting to take us into winter.

I learned a lot in this past year focusing on the planting element, this summary barely scratches the surface of the experience I had and gained. Above all, it was certainly enjoyable and fulfilling to work on an element which spans so much of the farm’s activities. By taking on the planting element I got a preview of what managing a small farm entails, and got to take a shot at doing a lot of it and learning through practice. I look forward to my third year here at North Slope and to continuing to hone and develop my skills as a farmer.