Logs reviewed and summary prepared by DD on 12/2/15

General Observations: In general, October brings a much slower pace of crop growth due to diminishing light levels and a significant drop in daily high temperatures. During this October in particular, the late season rains that never showed up in September came in full effect. The full list of fall crops are maturing in the field, while the last succession of crops for late November markets have been planted by the middle of September. With the cover crop on the soil surface, significant rains settle the seed and promote germination.

Equipment (28 hrs): The final field succession of fall crops was planted in furrows in Veg B north. 6 furrows were planted in the first week of the month. The crew noted that this succession was planted one moon too late to reach maturity for the last two markets of the year. The remaining equipment hours mentioned came as a result of prepping and planting fields into cover crop.

Administration (60.5 hrs): Reviewing important tasks such as maintenance of the irrigation systems becomes important as night temperatures drop well into the freezing range. With an increase in cold rainy days, office work becomes much more enjoyable. The typical tasks of payroll, bill paying and other accounting activities comprise the majority of these hours.

Infrastructure (170.5 hrs): October typically marks a time when significantly less worker hours are spent harvesting. Summer crops and flowers die from frost and crops begin to grow much slower than in the warmer summer months. Tasks which will benefit the farm in the short and long term can be focused on as more time is spent away from the production fields. Cleaning up production fields by removing/storing irrigation lines, submain lines, hoops and remay typically requires a significant amount of time with the whole crew involved.

Greenhouse (58.5 hrs): Preparing greenhouse gothic for early winter vegetables required several work blocks from the crew. The standard procedure for prepping a hothouse for production involves shaping beds, prepping them (broad forking, tilling and raking), seeding and covering them with appropriate materials for season extension (hoops over remay cloth). The remainder of the hours finishing high tunnel construction fill out the rest of these hours.

Composting (23.5 hrs): The final compost order for the year is applied to the fields in the first days of the month. 8 field furrows in total are composted. Completing composting in the greenhouse gothic for early winter production rounds out the composting hours logged.

Planting (81 hrs): As stated above the final field succession of fall crops was planted into 6 furrows in veg B north. Crops transplanted included fennel, kohlrabi, cabbage, beets, kale and chard. The crew logged this planting as likely being one moon/month too late to receive the best product possible from the seeds planted. Despite the fact that the number of days to maturity match the number of days to market, the decreasing sun levels cause the crops to grow at a significantly slower pace during the late fall months. The final plantings in greenhouse gothic (10/23) consisted of mesclun mix and other fall crops (turnips, radishes, kale, chard and brocolli).

Crop Care (125 hrs):  During October maintaining weed-free production blocks is less of a concern as the first hard frosts take care of the majority of the most aggressive weeds. However, cultivating and hand weeding crops under row cover is still a priority especially for the crops destined to be harvested in the last weeks of the season. Mesclun mix is also important to keep generally free of large weeds as it can be quickly overgrown, making harvesting with numb fingers a problem. Aside from cultivating established and recently planted crops, the majority of these element hours consists of either putting on row cover or cleaning/storing row cover.

Harvesting (263.5 hrs): As usual, these element hours are nearly half of September. With the frosts impending, the final harvest of summer crops and flowers keep the crew in a bit of a rush. However, the harvest rush in comparison to the middle of August is a cake walk. With cool, moist weather the rush to get post-harvested product into a cooling tank is less urgent. The remaining big garden beds of carrots are harvested for storage. This often takes a full four hour block with a full crew at hand. An interesting note unique to 2014 was the attempted seed saving of Costata Romanesco squash. This being an heirloom crop, the seeds will come ‘true to seed’ if isolated from other squash varieties (to prevent cross pollination) and preserved effectively. 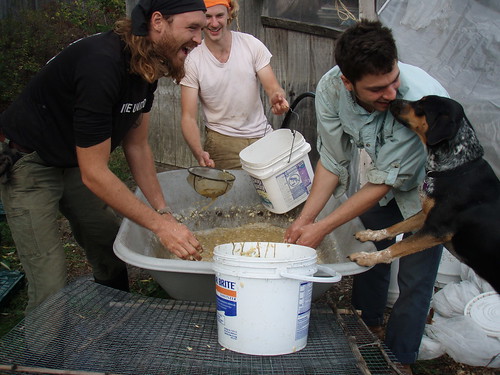 Handling (60 hrs): With a drop in temperatures and late season rains being the norm for October, market customers tend to drop dramatically after September ends. For this reason less product need be harvested and washed. Nevertheless, washing requires a significant amount of time for one or two people in the crew per week. This is especially true for washing mesclun mix which requires a good deal of time cleaning and packaging.

Marketing (170 hrs): The entirety of these hours are spent at weekend markets. The market totals for October 2014 were 9,000 dollars less than in October 2013. Some reasons to describe this significant lack of profit are the lack of mushrooms at market (only thirty pounds purchased per week in 2014) and the fact that there were only three market weeks in October of 2014.

Special Projects (55 hrs): The majority of these element hours for 2014 were spent either maintaining the high tunnels constructed in the spring or preparing the next area destined for high tunnel construction. Digging drainage areas and post holes becomes an area for construction lessons for the trainees.

Weather: Rain and killing frosts came in full effect during this month. After a particularly dry summer, irrigation is put as a secondary priority for the first time all season. Protecting crops from frosts becomes the main task for maintaining the viability of market products.

Week 1: The first week brought a deep soaking rain which was desperately needed.

Week 3: The beginning of the week brought the first hard frost with temperatures in the teens.

Week 4: The week ends in cold temperatures and a cutting wind for the last markets of the month.