Logs reviewed and summary prepared by Todd on October 15, 2014

General Observations: Log indicates both beautiful sunny days and rainy days in addition to some frosted mornings. Cover cropping is priority, and the tomatoes hang in until the 29th. On 10/10 the bunkhouse fire is first lit for fall!

Equipment (20.5 hrs): Standard bed forming practices utilized the IH140 and the 265. Some cultivating was done with the Williams tool bar on the 265. Cover crop planting required the disc harrow on the Ford and the broadcast spreader on the John Deere. The late Kubota fulfilled this months mowing duties.

Administration (53 hrs): Organic inspection on 10/4. Our use of conventionally grown strawberry seedlings changed the 579 field from certified organic to transitional until 10/1/2016. Because this space is used primarily to grow our flowers, the re-designation did not disrupt our production. Additionally, the season’s soil samples revealed high levels of Phosphorus. Mike caught up on some admin back log, paying bills, going through e-mails, and some website tune-up. With the end of the season almost in sight, he did the numbers from market and set the goal of maintaining $5,000 gross per week.

Infrastructure (55 hrs): Chickens are cared for and moved. General cleanup, chores, and some mowing and work on the Kubota are also logged. By the 26th, freezing nightly temperatures required draining of our irrigation system at the end of the day. Some downed trees from storms past are pulled from the woodlot for firewood. The tomato field is finally broken down on 10/29.

Composting (9 hrs): The last beds of 2013 are composted for planting!

Planting (59.5hrs): In the BGB’s we followed the regular planting schedule of our salad mix successions, tatsoi, 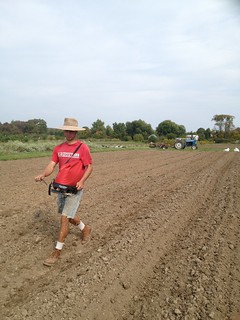 radishes and arugula. In addition the last couple field beds are prepared and planted. Cover crop is a priority during this month. Fields are all prepped with disc harrow and/or Williams tool bar. The beds that were formed for the beginnings of next season are sown with winter kill oats using an over the shoulder broadcast speeder; all others use a broadcast spreader on the back of the John Deere. A double batch that covers two fields consists of 4 bags rye, 2 bags peas, and one bad vetch. Both peas and vetch were not inoculated. The fields are seeded on the third and on the 15th they are thick with rye. Cover crop is also seeded into pathways of last remaining crops. Second round of seeding is completed on the 30th in the tomato field.

Crop Care (130 hrs): Irrigation rotation is maintained through dry conditions. BGB’s get tuned-up by mowing, hand weeding, and scuffle hoeing. Crops are covered in preparation for frost forecast, which happens on the 10/24.

Harvesting (246 hrs): Regular harvests were observed, occasionally delayed by frost. Additionally there was a second large harvesting of lemon verbena for tea filling eight of the green house tables. On a rainy harvest day the crew took comfort in coffee and doughnuts by the first of the late season bunk house fires!

Marketing (120.5 hrs): We recorded both slow and busy days at market through October. This shared the pattern with the weather. With the tomatoes lasting almost to the end of the month, we were able make two runs to the processor for making sauce.

Special Projects (4 hrs): Kyle moved micro greens to the seedling gothic on 10/21, set up heat mats for basil micros, and spent some time working on the general set up.