General Observations:  The first day of November was memorable for a “freak front,” that plowed through our Salad Harvest.  “..the salad harvest was going nicely until the weather turned very dark, then wind picked up and heavy rain.  A dull roar ensued as hard, wind driven rain pounded down – [the field manager] called the crew to take shelter due the extreme conditions.”  I remember as we stood up, the wind swirled around us, sucking all the cut lettuce out of our crates, creating a mini blizzard of baby lettuce…  “on return to the lettuce, it proved to be severely damaged by pellet like rain drops, and the harvest was abandoned.”  There were some notes of nice days, but more of “frozen ground,”  “uncovered crops lost to frost damage”, “late start to harvest due to freezing conditions.”  So November continues to be a month where the true character of the crew is tested and the manager struggles to fulfill production goals against increasing challenges.  November had the least total worker hours (324), half the previous month and one third of the busiest months.  We close operations after the weekend before Thanksgiving, so almost two weeks are just minimum chores and weather proofing. 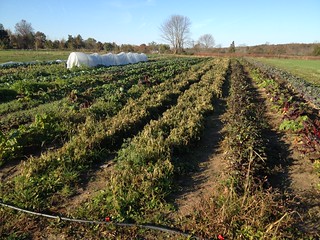 Equipment; 8 Hrs:  Ford and hay baler.  Notes of the Ford tractor overheating while field mowing.  MR cut the field to the north of the Eco-Cluster, controlling woody growth and rejuvenating a nice hay field.  A third of the field has been allowed to grow up in adventitious woody species as a dynamic opportunity to experiment with micro climates – woody wind break and southern solar access – needs annual and attentive mowing.

Administration; 23 Hrs:   The log notes “Afternoon – Workers need to be self motivated.”  I gave the crew the same lecture this November, and it rings true as ‘a statement of the end of the season.’  The worker and the manager struggle, usually side by side, but at least in common, towards the goal of finishing this and that task.  By the end of the season, it takes a hard push to keep productive, and the manager is usually at the end of their reserves.  Even if cheerful, the expectant gaze of idle workers, stirs deeply, in the manager, the desire; that the worker will internalize the practices of the season, mingled with an awareness of current needs, to be self motivated.  This is complicated by the change of season, conditions and evolving expectations, and the worker is appropriately looking for guidance!

Infrastructure; 39 Hrs:  KG noted thanks for use of newly tilled garden in Farmhouse yard, as he cleaned up the seasons debris.  Chores hampered by frozen conditions, water buckets are filled before draining pipes, and need to be tucked in non freezing corners.  After the last marketing weekend the pressure tank and all water lines were completely drained for the Winter.  Water for chores or misc produce washing now comes from the Farmhouse or the Ranch.

Greenhouse; 2 Hrs:  Tomato vine cleanup from two houses this month.  The hours were probably assigned to Crop Care, because the task must have taken 8-10 worker hrs.  Additionally, KG managed micro greens for sale to the farm ($189 this month), to resell.

Composting; 0 Hrs:  Each week, there is compost generated in the handling and marketing of produce.  A ‘Zero Hours’ hardly does justice to the focus of the composter – who diligently maintains containers to collect compostables, then empties them onto a managed pile in the Composting Area.  Here’s to you, Diligent Composter!

Planting; 20 Hrs:  Seeding cover crop in Farmhouse Yard Garden.  Last planted crops, October 16 and 19, are nowhere near ready to yield crop for last market.  Need to plant crops for last harvests by mid September.  Garlic Planted on the 19th; 6 beds, 10 worker hrs, 500 cloves per bed.  We positioned cloves to see if there is a noticeable difference in leaf spread next year.  Ie. “rounded side of clove planted towards the south vs to the west.”

Crop Care; 29 Hrs:   By this time there is no doubt but that the ‘Agricultural fleece’ or ‘Remay’ should be covering any crops that will be harvested or overwintered.  KG preparing summary, noted that this season we utilized <20,000 feet of drip tape.  Chard under remay protected from frost damage, uncovered it is not viable for harvest!  Where there is remay, there are crews tending them with each windy day, sometimes multiple times in a day.

Harvesting; 90 Hrs: Note that for fall harvest we should plant frost resistant head lettuce, in hopes of better results than the baby leaf.  Two weeks without salad mix due partly to slow growth but also the storm damage..  First week of November and notes are clear as to the effect of cold – “Harvest hampered by cold fingers in am and required warm gear right to the end..”  Second harvest of the month, note that cold hammered kale, collards and chard “all very sad looking, still frozen even at 10 am.”

Handling; 43 Hrs:  With large volume of carrot harvest, MR called Jess from Chickadee Creek Farm, to try out her barrel washer.  Constant tumbling and water spray.  To get product really clean, still had to be careful not to overload a batch and found best results after pushing the tumbled carrots back to top of (the slightly sloped) barrel a few times.

Marketing;  72 Hrs:   Labeling our Tomato Goodness Sauce and Ketsup for retail sales.  Calculations of time invested in the sauce process and $1 per pound for the tomatoes yields a retail value of $15 Quart.  It is an exceptional product, ‘Artisan Sauce’ and well worth the value.  The processor, Baumans Family Fruit Butters, is far away, which adds to the cost, but they treat the product well and it is proven in the taste and consistency.  Weekly market sales dropping, tomatoes fading out by third week.  Noted one week was a Kale cooking demo by Chris of Cherry Grove Organic Farm, wherein “..we all sold out!”  With last market of the season forcast to be 30 degrees F. MR put plan in action for extreme vegetable vending!  We dusted off a salvaged ‘wall mount’ propane space heater, and purchased a bottle mounted heater element to create a ‘warmth envelope’ at our stand.  On actual set up at Summit, we immediately had to give up the idea of tent walls because the wind was too gusty.  Ultimately, the wall mount heater was propped on the truck tail gate and produce was served out of the (above freezing) box of the truck.  The display was frozen solid all day, as folks asked for something we popped into the box truck to bring it out and encouraged the customer to hurry to their car! 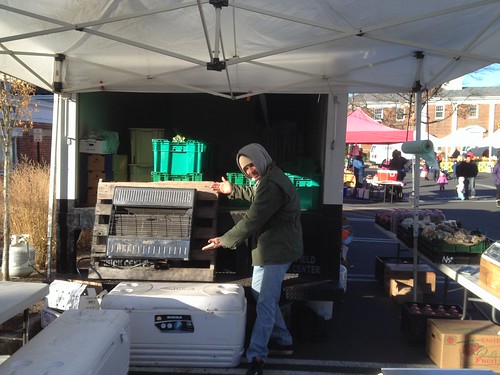 Special Projects; 6 Hr:  Harvested 72 bales of late cut hay from 4 passes around the outside of CNE Field.  The pattern struck me as a way to combine haying and veggie production, that the outside perimeter of a large field might be utilized as the longest straight runs for the hay equipment, leaving the center of the field for shorter rows of tended food crops.