May 9th, 2014 | Posted by JacobThies in Monthly Summary

General Observations:  Markets up and running, wholesale seedling orders to WHC, all crew members finally together, some unseasonably low night temperatures (5/14-15 & 5/26) that led to major tomato set back, but rest assured, May finally revealed her warming smile with highs in the 90’s and warm nights in 70’s by Memorial Day weekend. May lends itself to be busy, productive, and many variations in weather. 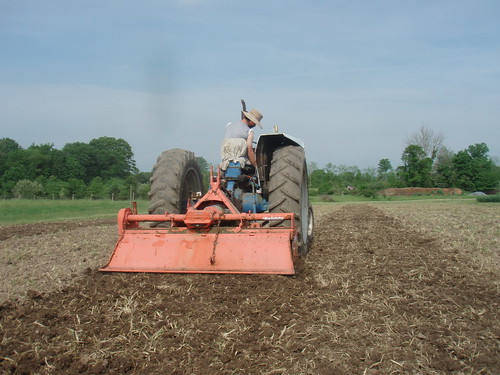 Administration (55 hrs): Crew received training on the use of Quicken program.  Made and placed an irrigation order to Rainflo (details of order not mentioned) & inventoried tomato stakes (5/8). MR trained TH on payroll, accounting, and a general introduction to the Element (5/14). Updated crop plans for corner garden and made note of opening for green beans and more radishes, carrots, and turnips (5/27). Owen joined the crew and received formal introduction. Total Admin up 10 hours from previous year. Possibly due to TH taking on Admin Element leading to additional training from MR.

Infrastructure (79 hrs): General maintenance including moving of chickens, mowing, weedwacking, and subsequent fuel runs to manage upkeep around the farm. Hay bales were collected from the central fields, 579 North mowed out in preparation for primary tillage, covered crops mowed, and primary tillage performed.

Greenhouse (136 hrs): Overall, there was general upkeep of the greenhouse from watering to seeding to potting on. On 5/8, crew began new seedling orders for WEC. Special note that there was a tomato variety supply crisis created by “poor planning.” Not enough supply to meet the demand. Note of emphasis to “address current shortage and assure ample production for next year.” MR gave greenhouse introduction to MB & BY detailing greenhouse order form, organizing greenhouse tables, proper potting on methods. Prepped Farmhouse Gothic for tomatoes by hanging strings on 5/22.

Composting (38 hrs): Compost was continually sifted throughout the month for potting and seeding. On 5/5, crew composted sweet William and hyssop along with the southern most 100’ bed and northern most 50’ bed in CG. 5/7 crew composted Veg C  Mid in preparation for tomatoes. On 5/31, BGB SW 1&2 were composted.

Planting (177 hrs): On 5/1, crew started the month by seeding lettuce in BGBs. 5/5 found crew thinking tomatoes and used Haybine to cut cover crop off Veg B and C Mids with intention of plating tomatoes soon. Two days later, Veg C mid was prepped for tomatoes on 5/7 and planted tomas, leeks that afternoon. On 5/10, direct seeded intercropping parsley and onions in BGB. On 5/13, focus moved to CG where 3 short beds were seeded with H. Turnips. 5/14, 2 more BGB were planted with beans. On 5/15, RR & KG seeded more lettuce in BGBs. On 5/23, tomatoes were planted in Veg C mid. On 5/27, crew seeded 100’ bed in CG with green beans on shoulders and cantaloupe down center. By the end of the month, crew began next eggie succession beds and the beds for first flower succession. Noted that primary tillage was late and extra rototilling was required to speed up breakdown of residual cover crop.

Crop Care (226 hrs): The crew spent many hours tending to the crops. On 5/1, crew weedwacked in CG – both pathways and bed edges. Southern most strawberry bed wacked as well – save for a few patches of plants for transplant. On 5/2, the east bed asparagus was weeded to remove hyssop, scuffled hoed cabbage in Veg A South and remay applied on newest salad to encourage germination. On 5/5, used fish & seaweed to fertilize all plants in CG. On 5/10, more scuffle hoeing in BGBs specifically for salad, onions and parsly – also stalked grapes and peas on trellis (north side only). On 5/21, TH used Big Red to cultivate the garlic. On 5/22, the crew flame weeded carrots. On 5/28, crew spent time cleaning up FHG and mulching tomatoes w/ straw. A second “Holistic Spray” was applied on all fruit trees, hazelnuts and NW end of Veg A veggie succession on 5/30.7

Harvesting (229 hrs): In preparation for first markets of the season, training was given to first year trainees regarding sanitation, harvesting techniques, and tools. Crew harvested a multitude of crops including arugula, mizuna, kale, tat soi from Ralph’s House, spinach, radishes, salad mix, asparagus, and microgreens. The majority of the crops were available throughout the month for Saturday and Sunday markets. By the end of the month, NSF was harvesting dill, oregano, spearmint, and head lettuce for market. 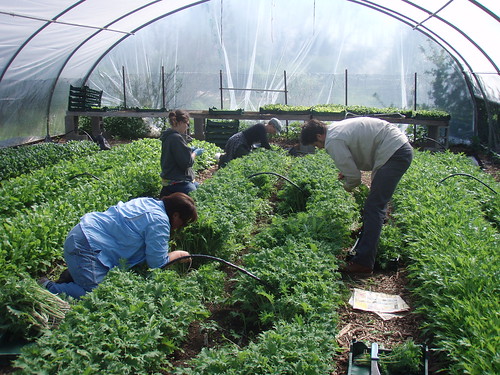 Handling (101 hrs): Hand in hand with harvesting, MR gave training to first year trainees on 5/10 regarding product handling standard operating procedures. On 5/1, stinging nettle was harvested and handled for drying. On 5/8, crew bagged and labeled hyssop and nettles. For the rest of the month, crew spent handling time washing, spinning, and bagging salad mixes and cleaned bunched greens.

Marketing (91 hrs): Market season began! In preparation for seedling sales to WEC, crew marked each individual cow pot and four-pack for sale with plant ID labels. On 5/6, NSF sold four pounds of dried stinging nettle to Cherry Grove Farm for their Nettle Jack Cheese. The middle of the month saw us with great market day weather and successful sales days. The third week was cold and windy for Saturday but warmed up for a successful Sunday market.

Special Projects (4 hrs): KG seeding, tending, harvesting, handling microgreens throughout the month. Noted that there was a missed succession but problem was resolved and back to normal seeding.

Week 3: Cool temps and rain to begin the week, though it gave way to warming weather and sunshine by the end of the week.

Week 4: Rainy, cool, and very windy. Unseasonably low night temperatures. End of the week brought hot (+90F) by the end of the month.