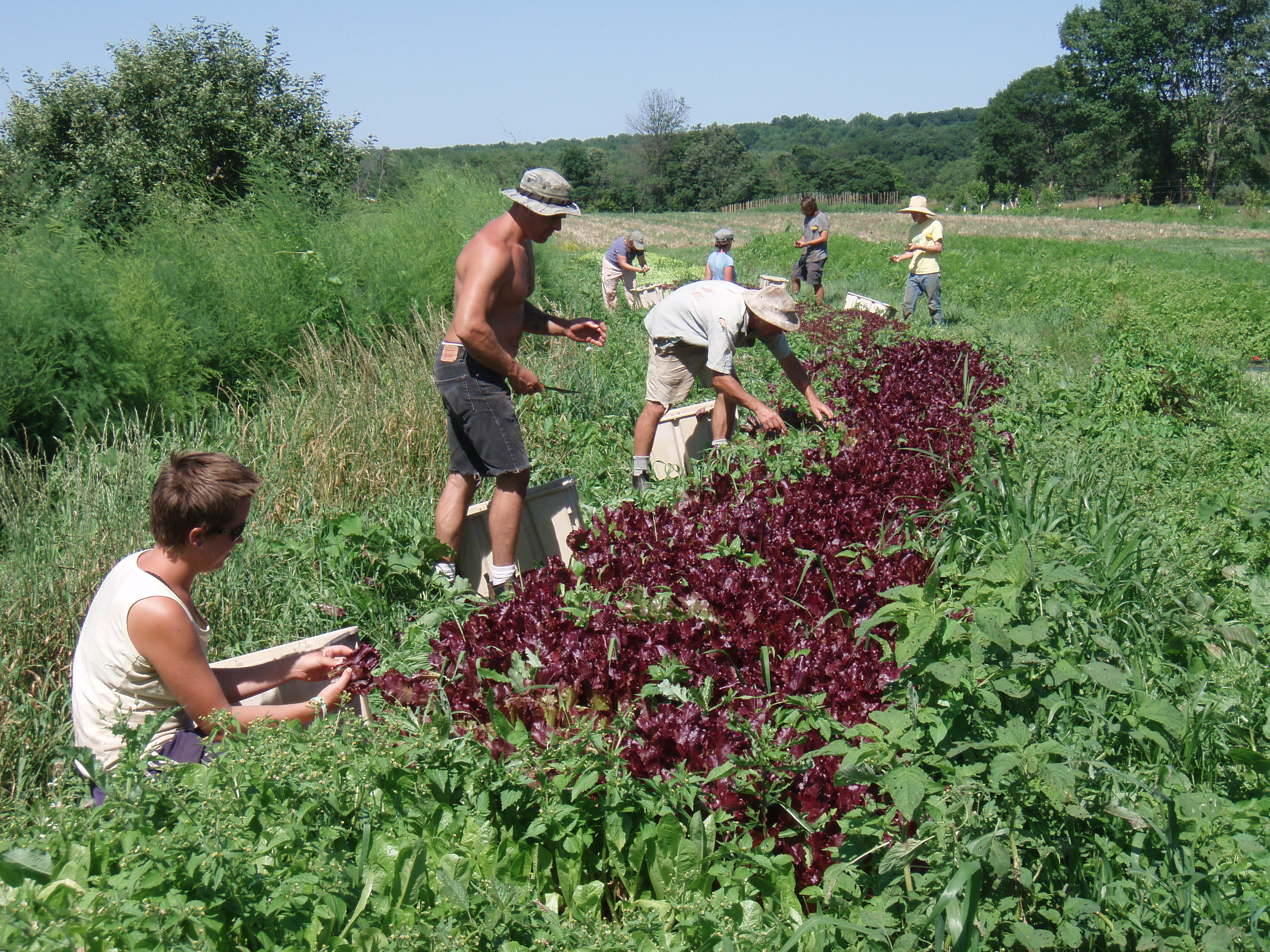 General Observations: Ahhh it’s June!  This seems to be the thought of every farmer I’ve ever met come June.  We all wonder what exactly happened to May and even April for that matter.  The weeds are going crazy, some sneaky trickster must have fed all the worst of the weeds some sort of plant steroid…or perhaps it’s just because our days are at their longest and evolution has created a mighty plant foe in the field for us to either battle relentlessly or come to a sort of equilibrium with the deemed opponent.

No matter the cause or the farmers stance on weeds, every farmer begins to look at the To-Do list grow while the Done list seems to pale in comparison.  Ah well, I suppose it’s summer…oh wait, that’s right Summer Solstice!  In the middle of the crazy heat and insanity that is June, North Slope Farm always tries to appreciate and honor the Summer Solstice.  What better excuse for a celebration than the changing of the light levels and the passing from Spring to Summer.

Equipment 88 hrs: Trackers are used for plowing, ripping, bed forming, cultivating and general use.  Also equipment, like the Kubota and weed whacker, were used for mowing down weeds and cutting hay/straw for use on North Slope Farm.  The Volvo needed work done, got a new starter motor…a lot of work has gone into the Volvo over the years which may indicate it’s on it’s way out.  General maintenance was also needed on the IH140 which needed the battery connection cleaned.

Administration 58 hrs: Pay roll, balancing check book, deposits, consolidation of invoices and general accounting management, what fun!  Organic Certification Forms had to be filled out and turned in, don’t want to lapse on your organic certification or your asking for trouble.  MR had a phone interview during the month of June.  Seed orders for seeds we ended up lacking in had to be made to complete the year and irrigation rough drafts were made. Monthly summary, as always, were written and posted and photos were updated.

Infrastructure 82 hrs: Continual mowing and weed whacking…lots of mowing and weedwhacking- perimeters of farm and fields, around buildings, greenhouses, etc. in a continual fight against the ever growing weeds (Darn those “plant steroids”).  Fields were also continually mowed down for cut straw for mulching our field beds and using in our chicken coops.  The chicken chores continued, moving coops weekly and general cleaning of coops and feeding, watering and collecting eggs always have to be done.

Greenhouse 55 hrs: Stringing tomatoes in the greenhouse; continual/constant pruning of greenhouse tomatoes became a weekly chore.  We also had to continue to seed the next succession of seedlings for the field.  There was also trellising peas in Ralph’s House greenhouse.

Composting 50 hrs: Many beds needed to be composted including beds in the 579 field for flowers, tea garden beds in the corner garden, BGBs for direct seeding salad mix and out in Veg B Mid for the next succession of transplants. Compost sifting for the greenhouse was also a continual chore.

Planting 73 hrs: Lots of planting needed to be done in June, including direct seeding flowers in the 579 field.  Also, soyo long cucumbers (yum) and yard long beans (yum yum) were direct seeded in the greenhouse.  Additionally, 1st years were given training on direct seeding salad mix in the BGBs, including training on proper mapping and recording of work done.  Also, lots of transplanting was done in Veg B Mid, scallions, red beets, gold beets, chard, touscano kale, red Russian kale, basil and summer squash while green beans, turnips and radishes were directly seeded there.  The last of the tomatoes, eggplants and peppers were also transplanted out in the tomato field.  We cleared out space in the greenhouse of all these transplants just in time for us to fill it again with the newest seedlings for the next veggie succession in the field.

Crop Care 184 hrs: Weeding, weeding and more weeding.  There was also staking and stringing of tomatoes and mulching their beds and lots of pruning of tomatoes in the greenhouse.  The 1st years got an introduction to the irrigation systems for directly seeding in the BGBs and how to use the moisture system to check levels in the Farmhouse Gothic for proper irrigation.  Irrigation had to be continually kept track of because the rain during the month was variable and often came all at once, quickly followed by long hot days that rapidly dried field beds.  All of which was followed up with more weeding…of peas, carrots, salad beds, strawberries, and every other field bed.  There was also cutting of hay from fields for hay/mulch.

Harvesting 170 hrs: Lettuce, spinach, turnips, chard, kale, strawberries, peas, squash, garlic scapes, parsley, beets, radishes, garlic and flowers were all being harvested in June. A hot and humid heat wave spurred longer lunches and extended work days into later evening hours when it was hopefully mildly cooler.  One afternoon/evening the crew struggled to keep going to gather and store bales of hay that had been cut.  Everyone was loosing incredible amounts of water due to sweat in heat and high humidity but finally finished a long day, getting all the hay stored safely and dryly in the seed shed only to have a storm blow in 15 minutes later, redeeming all the work done to save the hay from being soaked.  The thunderstorm also brought a more than welcome break in the heat and a needed shower for all crew members who had bits of hay sticking to every inch of skin.  Additionally, there was also a one time picking of mulberries from single mulberry tree-yielding 5 pints in one hour of picking.  But the tree also was hours of entertainment for not only children of workers of the farm but workers themselves-nothing quite like a mulberry break in the mists of a hot day.

Handling 47 hrs: As always, washing of greens and roots.  For the first time we broke up Friday washing with Thursday, hoping to reduce the pressure on Friday and maybe break up the day into doing different work in the afternoons.  An overview on washing was given by MR and washing eggs was a continual chore.  Seedlings for orders from the Whole Earth Center also had to be collected and delivered.

Marketing 149 hrs: In the middle of a month where fair or foul weather can make or break a market, Wednesday Hopewell Farmers Market experienced quite a number of rainy days or days suffocated by heat and humidity, which majorly impacted the number of customers who came out.  Also, Cherry Grove Organic started at the Hopewell farmers market in the month of June.  MR began to coordinate mushrooms and Solebury Orchard orders for market, in mid-June there were the first apricots and sour cherries.  Also, the special order with Kitchen Garden seedlings was delivered, total came to $487.  6/16 the farm stand opened for first time at NSF.

Special Projects 22 hrs: ST’s Black Bird Meadows continues, tracking becomes of greater importance as bed forming, staking, mulching, planting continues.  ST also experiences having to get rid of seedlings which became root bound after they did not make it into the field.  NOFA NJ came to observe sun hemp as a cover crop at NSF, taking measurements to see how sun hemp fairs under certain treatments. MD and ST take measurements of the newest field, mulch field south east, to lay out the field perimeter and began to chisel plow.  MD introduced workers to the log splitter and crew started work on clearing a stack of logs from the forest and stacking for firewood for winter use at the farmhouse.  Also, RC lead up crew lunches in the afternoon.

Weather: Week 1: Hot and Humid a heat wave sets in early but strong winds from a front gave a break for some relief before the heat returned

Week 2: The week started hot and dry, optimal time for hay cutting but by the end of the week relief from the weather came in a front bringing cooler temps and rain showers- .9” rain

Week 3: Slightly cooler week with rain storms in the forecast all week – 1.25” rain

Week 4: Humidity and heat still beats down on the crew but the promise of thunderstorms is ever looming- .5” rain but ending the month dry without any rain in the forecast for the start of July