General Observations:  July was another hot month but things carried on at the farm. The crew was able to get a lot of weeding, mowing and other maintenance taken care of leaving the farm looking tidy and awesome. Mike was out for some time because of back injury but Colleen was able to manage the farm and keep the crew hard at work.

Equipment (70 hrs): Despite the difficulties with machinery last month, the crew managed with what was available: The Kabota got some mowing time in before getting stuck in the eco cluster. The John Deer was used to load compost into the trailer for easy compost spreading, and the Billy goat helped with the BGB cleanup. The weed wacker was used to clean up the pathways and edges in the corner garden. Also, the ATV got looked at and it was decided that a part needed to be replaced.

Administration (63 hrs):  Mike is out for a few days due to a bad back. Colleen takes responsibility for ongoing farm operations and crew members pick up some extra tasks like payroll and other paperwork.

Infrastructure (87 hrs):  The crew worked around the farm to get it nice and trimmed. The farm perimeter got mowed along with the area around the peach, cherry and hazelnut trees. The farm stand area and the walk in cooler were all cleared out. It took some work but the farm looks kempt.

Greenhouse (61 hrs): While thinning, Colleen noticed that the Swiss chard is being seeded too heavily. It was recommended that it be seeded at 1-2 seeds per cell. The following vegetable succession was seeded (7/17) and two interns are assigned to seed the one after that (7/23). Overall, things were running smoothly in the greenhouse.

Composting (10 hrs):  Compost was laid on a few beds in the Corner Garden and 3 Big Garden Beds. A trench was filled with compost for leeks and scallions. Compost was also laid on 4 beds in Central Field South to prepare for planting (7/9).

Planting (119 hrs):  New Vegetable and Flower successions were planted! Carrots and lettuce (3 varieties: red oak leaf and green and red romaine) were planted in 2 big garden beds. The crew direct seeded 4 beds worth of beets in the central field. Also, 2 beds of cucumbers, 1 bed of kohlrabi and 2 beds of basil were planted in the corner garden. The crew direct seeded 2 Big Garden Beds with field lettuce and planted kale, chard, beets and cabbage in field beds. Flowers were the last thing planted this month. (7/27) Planted 2 beds of flowers and (7/30) planted 4 beds of flowers.

Crop Care (306 hrs): As always there is much to do crop-care wise around the farm. Greenhouse tomatoes got hit first with some weeding and pruning. Then the field tomatoes and leeks were next. Both were weeded and mulched and the tomatoes were strung. Other things also got weeded such as: green beans, salad mix, carrots, grapes, blackberries, kale, and chard. The Green Oakleaf Lettuce was unfortunately abandoned because of “crazy grass growth”. (7/18) A note is made about the importance of keeping a constant cycle of irrigation going especially in times of high heat. (7/22) The crew used the 100 gallon tank to water the trees. 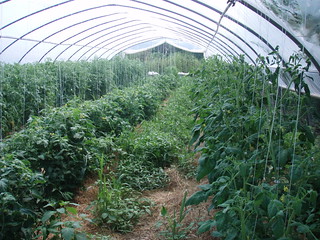 Harvesting (363 hrs): (7/10) Green beans and Summer Squash are cleared from the Big Garden Beds.  As usual kale, chard, beets and salad mix are all harvested. However, on 7/12 the number of pounds desired was 80. However, 76 pounds was all the crew could get. (7/15) 4 tables of Mountain Mint were harvested. (7/18) Flowers were harvested for bunches. Towards the end of the month the carrots were too mushy and the decision was made to not harvest.

Handling (88 hrs): (7/4) Mike started off the month by donating extra produce.  (7/5) Then, Colleen trained the crew in hydrocooling, and explained difference between “producer” and “processor.”  After that, things fell back into their regular groove.  The crew hydro cooled kale, chard, beans, and salad mix.  (7/21) Mike washed eggs while Colleen bunched flowers. (7/25) Crew focused on importance of “containers” and harvest log.

Marketing (115 hrs): (7/7) Markets seem slow.  This was possibly due to heat wave and holiday weekend. (7/13) Markets picked up.  Decent amounts of produce sold at both market but it was still not a busy as usual. (7/21) Third tent set up for the first time at markets! However, there was a lack of: beats, radishes, and eggs.  Note was made that cases of portabella mushrooms were moldy and not sellable.  Also, packing micro greens at market was not working, and time should be set apart during the work week to pack.  (7/27) Both markets very busy (yay)!  Market managers counted 913 cars.  At West Windsor, we almost completely sold out and at Summit we made $4075.

Special Projects ( 19 hrs): (7/2) Micro greens harvested, and sunflowers were sampled.  (7/11)  Micro greens were and cilantro was added to the mix. (7/23) 12 trays were seeded.  Note is made that harvesting should be done during the work week preferable on Friday, and sun flowers need to be harvested early (before fuzzy true leaves show) for best taste. 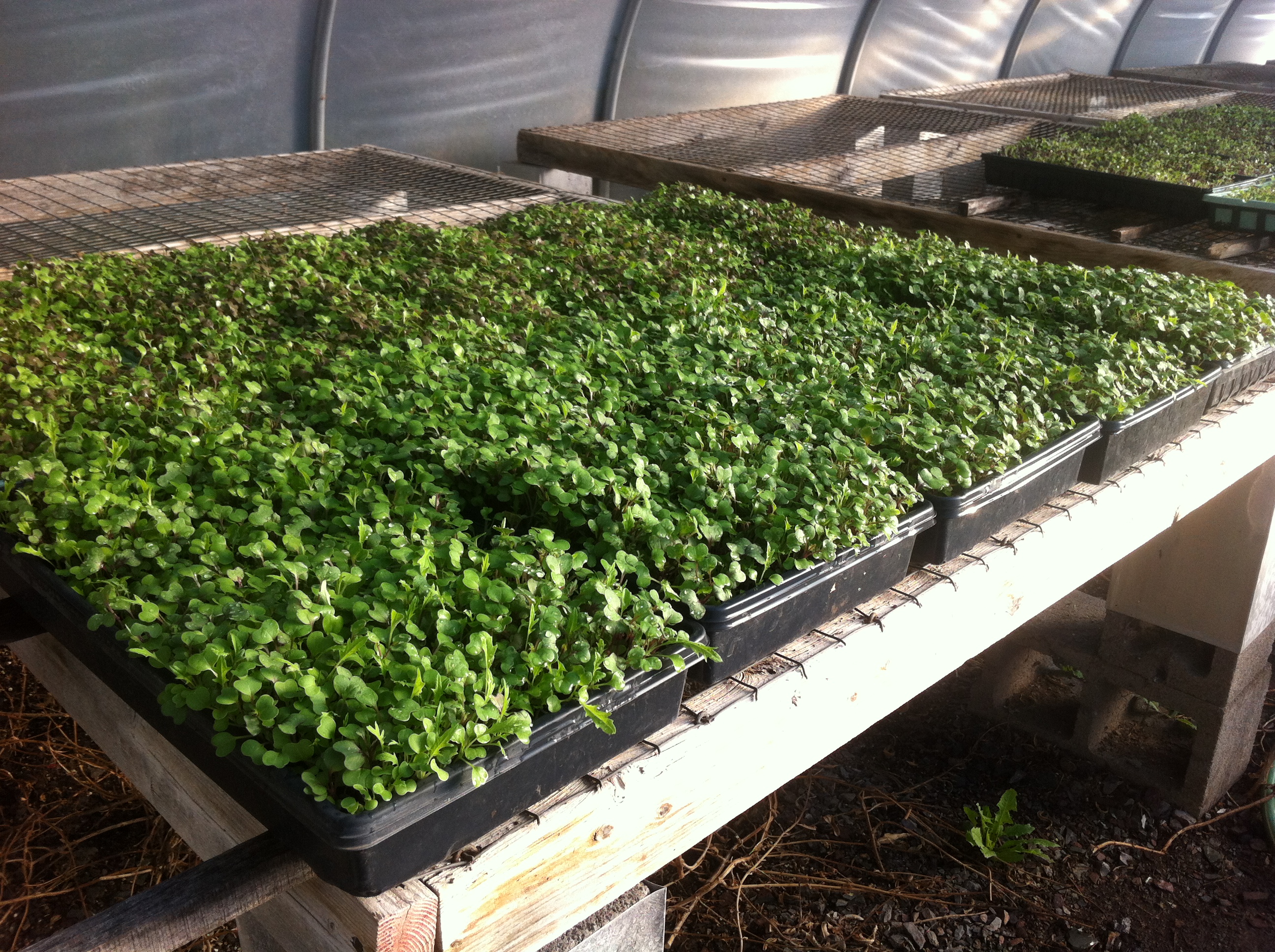