Logs reviewed and prepared by DD

General Observations:  Overall, this month was much more mild than normal with a dry beginning and a mild ending. TH in charge of crew during first week while CH and MR on vacation. Cover cropping placed as a significant priority. MR determines seed order with crew by preparing planting map. Crew begins experimenting with favorable furrows when planting remainder of summer crops and beginning of fall crops. Markets down significantly from previous year (-$6,000) due to less fruit (blue and blackberry) sales. Also a notable and ongoing problem is the mexican bean beetle population increasing throughout summer. Aside from the usual weekly markets the crew spend the height of tomato season sorting tomatoes for processing.

Equipment (15 hrs): These element hours were reduced by 10 from the previous year and 70 hours from 2012. This was a result again of loose record keeping by machine users. For example on 8/12, a day in which 4 favorable furrows were ripped, composted and planted no machinery usage was logged. Furthermore, furrow preparation has proven to be an expedient process with the equipment available and may have had some influence in the reduction in equipment hours mentioned. (8/12) First years were trained on Kabota mower usage. (8/16) MR took moldboard plow to unruly 579 field to plant into hay. (8/22) Favorable furrow preparation in veg b north allowed crew to proceed with planting of fall crops.

Administration (24 hrs): Standard payroll and bills comprised the majority of these element hours. (8/8) The cover crop order was due to be sent in. This prompted MR to explain the growth characteristics of various cover crops and their applicability. Total farm acreage was mapped and labeled with desired cover crop and/or intended usage. (8/20) MR began Kobota mower operation demonstration for first years. (8/26) Crew introduction to primary tillage for cover cropping. The importance of maintaining a mental field layout when using the chisel plow (Ford 4600) was discussed

Infrastructure (45 hrs): Standard mowing of the farm properties and various livestock requirements comprised the majority of these element hours. (8/14) MR used haybine to cut wild crop of ragweed smothering red clover in Central South East North Field in preparation for cash crop planting in 2015. (8/28) The walk in cooler was cleared of summer produce to make room for fall storage crops. Crew estimates close to 100 pounds of summer squash were composted or used for livestock feed (8/29) Cover crop seed order placed on 8/9 was picked up and a stored for later use.

Greenhouse (26 hrs): (8/12 + 8/13) Full crew trim and trellis tomatoes in high tunnel 1 and ralph’s house. (8/16) Some of the last seedlings to be transplanted in the fall are seeded by CH (8/27) Trellising the greenhouse tomatoes in the aforementioned high tunnels is a priority with maximum fruit output occurring.

Composting (23 hrs): Planting of the final summer crop successions and the first of the fall crops results in quick usage of compost orders. (8/10) Furrows are prepped in Veg B north in preparation for fall crop planting, while the western big garden beds are planted with various crops.(8/22) Crew focuses on large planting of western big garden beds in preparation for large rain forecast. (8/26) The last rows of summer squash and green beans are composted for planting. 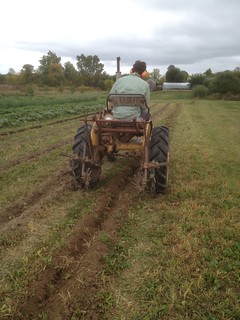 Planting (46 hrs): Planting the final summer crop successions and the beginning of the fall crops helps the crew remember that there is a light at the end of the tunnel. (8/5) Two big garden beds are prepped for direct seeding of salad mix. (8/12) Fall crops (ie: mizuna, collards, fennel, kohlrabi) are transplanted in favorable furrows of veg B north. (8/21) MR discusses preparation for garlic planting which will occur later in the year after the first frost. 220 foot field beds are to be planted with cloves spaced 5 inches apart. In total 6 beds need approximately 3200 cloves for a full planting. (8/22) The western big garden beds were prepared for planting. Hakurai turnips, arugula and tatsoi were direct seeded into the northern beds, while 3 beds of carrots, 2 beds of salad and one bed of radishes were direct seeded in the southern beds. (8/26) The final planting of frost tender plants were seeded into favorable furrows (1 row summer squash, 2 rows of beans).

Crop Care (160 hrs): The maintenance of existing summer crops is usually of slightly less importance during august. Fall crops in infantile stages require the most attention to maintain growth in what is typically a hot and dry environment. In this process, old field successions are cleared through mowing and/or tillage and either a cover crop or a cash crop are planted. Our main cash crop; tomatoes, require significant attention during august to ensure the plants are trellised and mulched properly (8/11) An old flower succession was cleared of trellising equipment and mowed off using the billy goat. The Kabota mower was also used to mow off the strawberries and hay in the field adjacent to 579. (8/12) TH rototilled pathways of central southeast north field to knock down grasses encroaching on cash crop. (8/13) High tunnel tomatoes were clipped and trellised by the crew. (8/20) A very dry period prompts irrigation. A rotation of two zones per day provides sufficient water to crops without overwatering. (8/27) Cash crops direct seeded in the big garden beds (ie: lettuce and carrots) are all hand weeded. Hand weeding comprises a significant portion of crop care element hours as full crews are typically involved.

Harvesting (359 hrs): Harvesting hours increased by about 100 hours from last year. Poor yields and efficiency seemed to reduce overall harvest time for 2013. During this peak time of production the main priority is maximizing yield through timely harvest. Both hothouse tomatoes and field tomatoes provide their full flush of fruit and other crops like squash require two pickings per week. Flowers are a valuable commodity for any diversified farm as the crop generates valuable income while attracting beneficial insects to surrounding cash crops. Aside from flowers, greens and salad are harvested on mornings prior to market.

Handling (70 hrs): Hydrocooling/washing of crops requires a significant amount of time throughout a single month. To ensure no leafy greens are wilted in the heat of the summer, greens are harvested and promptly cooled through washing. Egg washing by first years and garlic cleaning after harvest round out the remainder of the hours not accounted for by washing.

Week 1: Week begins with rains saturating the soil, but conditions remain clear and dry for remainder of week.

Week 2: Hot and dry conditions prevail and irrigation needs must be tended to sustain all crops in production.

Week 3: Conditions remain dry but cooler days with highs in the 80’s offer a brief respite from usual august conditions.

Week 4: First real rain in three weeks comes in the beginning of the week and is followed by another two days later. Conditions for the rest of the week dry out but cooler conditions prevail.