General Observations: August proved to be hectic and full of activity. Farm visit from NOFA and CRAFT Farm Tour, successions of core veggies continued to be harvested and planted (and even a 100 lb harvest of salad!) and the harvesting of tomatoes and hundreds of lbs of carrots translated to good sales at both SMT and WWCFM. Though, aphids proved to be problematic and Neptune was used and extra care was noted during post harvest handling – specifically for fending off aphid eggs on the under leaf of kale.

Equipment (25 hours): Equipment usage was recorded at 25 hours: down 60 hours from 2012 and down 30 hours from 2011. My guess is not all hours were noted on element hours sheet which has skewed the final figures. As an example, Billy Goat was used on 8/28 but no time was logged on element hour list of using that equipment. 12.5 of those hours were on the Kabota, 3 on the JD, 1 on the ford, and 9 on the IH 40. IH was used on multiple days to form beds by BY, later in month to haul a sprayer, 265 with small tiller for bed preparation, and chisel plowing training for RR. By the end of the month, crew noted that the kabota was “very broken. Needs to be brought to shop or graveyard.”

Admin (46 hours): Accounting and payroll continued as per usual, though with the note that there was a farm audit on 8/13. Another note worth mentioning, KG made an adjustment to the tomato harvest sheet to allow for both location and harvest date tracking. Seeds were ordered for fall planting, and two farm visits took place: Sean from NOFA visited the farm to interview crew about internships and MR prepped for CRAFT workshop on Bio-intensive vs. Bio-extensive at NSF. 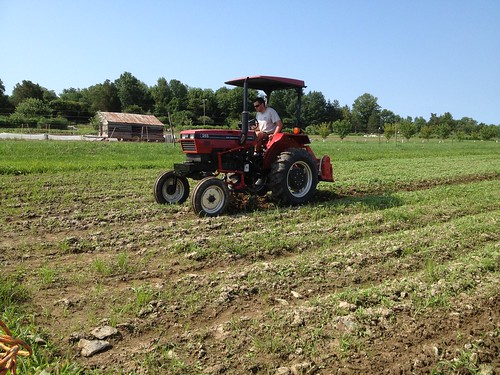 Infrastructure (45.5 hours): Lots of mowing, moving and cleaning chickens, a recycling run, and the destruction of the old “farmstand bench” near the washing area were all logged. Also, as a note, the farmhouse had some plumbing issues – both toilets and dishwasher seemed to quit functioning properly. Technicians were called in to remediate the issues.

Greenhouse (20.5 hours): Tomato care and seeding dominated the greenhouse hours. Tbe tomatoes were given time to clip, mulch, and deal with early blight. The troublesome blighted plants were bagged and buried. Besides the tomato care, seeding veggie successions happened over the course of a week around the middle of the month. The crew was waiting for a seed shipment to finish the succession. Later in the month, the crew noted that the seedlings were consistently “leggy” with no roots. Full summer foliage could have blocked critical sunlight to the seedlings. 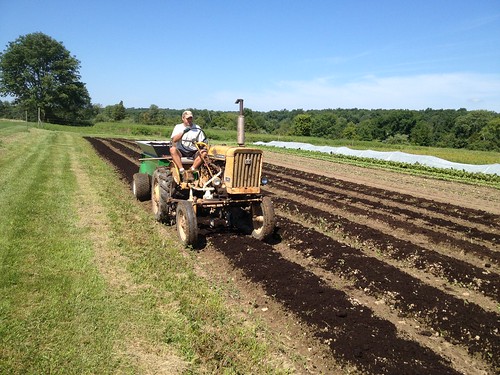 Compost (5 hours): The 140 and spreader were used to get loads of compost over the fields in preparation for planting.

Planting (109.5 hours): From the beginning of the month, crew worked hard to stay on top of planting. Efficient work led to quick work – notes of planting 5 BGB before lunch on both 8/6 and 8/21! Crew members received training from MR regarding bed forming, stale seed beds, and making sure the entire crew is “aware of the plan” for planting and the steps necessary to implement the plan.

Crop Care (215.5 hours): Lots of hand weeding and scuffle hoeing to save lettuce, carrots, leeks, and other crops. Tomatoes in the field and greenhouses needed trellising and mulching. Lemon verbena grew to the point of needing trellising in the corner garden. A long note was made to discuss the aphid infestation on field crops. Crew applied M.Ped  and Neptune to 6 field beds in MFSEN. Crew used a combination of a watering wand, “old sprayer” from barn top, and the 140 with tank and went through 200 gallons of mixture for 9 beds for the day in an attempt to curtail the aphids. Another note of crop issues was noted on 8/22 where kale, chard, beets, cabbage were all “seriously effected by some sort of wilt causing disease.” Were these due to being covered under field tunnels?

Harvesting (264 hours): Down 110 hours from last season and 310 hours from 2011, harvesting seemed to be down due to a combination of greater efficiency and lower yields. On 8/1, crew noted that harvest went quickly due to “small yields.” Elsewhere in notes, crew lauded their efficiency. Crew harvested blackberries, squash, field and green house tomatoes, salad mix (CH handled 100# harvest!), carrots (+200# beds), and core hardy greens.

Handling (50 hours): Handling included all Thursday and Friday harvests, garlic cleaning, and eggs. During the aphid plague on 08/13, the Kale was reported to have lots of aphids. Proper attention was given to properly handle the kale as to remove aphids as best as possible.

Special Projects (1 hour): Although noted as just one hour, many more hours were spent with Harvest Moon CSA @ NSF. KG and RR used farmhouse garden to grow tomatoes and basil which was wholesaled to NSF for sale at WWCFM and microgreens that were wholesaled to NSF for sale at SMT. As for microgreens, August was a good month to show the good and the bad with micros. On 8/9, KG harvested 47 1 ounce units of micros for a potential $211.50 if all sold. On the other hand, microgreens proved to be finicky. On 8/14, KG lost “another succession” of micros because of not being uncovered on time. Overall, microgreens seem like a high yield product, though proper care and attention must be paid.

Week 4: More rain, drying conditions towards the end of the week